Favre-Leuba was fonded by Abraham Favre and his two sons Frédéric and Henry-Louis. At that time the brand was called A.Favre & Fils. In 1896, the company was still a family affair and the headquarters moved to Le Locle in Switzerland. In 1925 Favre-Leuba launched a monopusher chronograph and in 1948 Favre-Leuba unveiled chronometers for the first time. Eventually in 1955 Favre-Leuba announced their first in-house calibre, the FL101. One year later, Favre-Leuba would use this calibre in several watches like the Sea Chief, Sea King and Sea Raider. In 1960 Favre-Leuba introduced their first diving watch, the Water Deep and two years later, the Bivouac, the first mechanical wristwatch featuring an aneroid barometer which measured altitude and atmospheric pressure. In 1963 the Deep Blue is released which is a 200 metres water-resistant timepiece. In the 70’s, the Sea Sky and Sea Sky GMT were introduced both as chronographs, divers and GMT watches. In 2011 the Tata Group bought Favre-Leuba and in 2012 the brand radically changed their watches. The idea was to give the brand a more contemporary identity in line with modern standards. 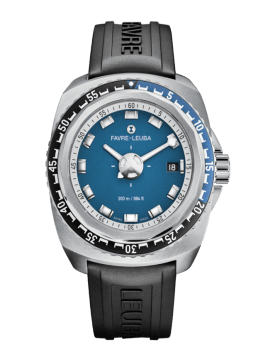