Mostly associated with James Bond and the space conquest, Omega’s history is also one of the most ancient one. Celebrities like Gorbachev, John Paul II, Elvis or Kennedy have been photographed wearing an Omega. Thus, some of Omega’s bestsellers have become icons today like the Seamaster, the Speedmaster or the Railmaster.

Omega was founded in 1848 by Louis Brandt whose brand was “Louis Brandt” at that time. The company changed its name in 1877 when his sons Louis-Paul and César joined him. The name became “Louis Brandt & Fils”. The first Omega caliber (the “19”) was created in 1894 and proved very accurate and easy to repair. According to its great success, the company changed once again its name and becomes Omega Watch Co. The first Omega wristwatches were produced in 1900. Omega’s watches were worn by British officers during the Boer War. At that time, Omega was one of the first firms which produces serial production of wristwatches.

• The Seamaster: In 1948, to celebrate Omega’s 100th anniversary, Omega’s sales director wanted to create a sporty waterproof watch. Bannwart, the designer, did not have enough time so he designed something incomplete and “bulky”, compared to traditional watches. Surprisingly, Omega’s sales director fell in love with the bulky design : the Seamaster was born. In 1957, the design of the watch changed and looked like a true “diver’s watch” as we picture it today since it was the release date of the “Master’s Trilogy : the Speedmaster, the Seamaster 300 and the Railmaster.

• The Constellation: The name of “Constellation” emerged in 1952 to name officially certified chronometers. The first model appeared in 1945 and, thanks to the high quality of these models, the Constellation became the first serially manufactured wristwatch chronometer.

• The Speedmaster & the NASA: Released in 1957 just like the Railmaster and the Seamaster 300, the Speedmaster’s name came from the tachymeter ring around the dial. The Speedmaster was basically a chronograph powered by the Lemania caliber 321. Born in 1963, the reference ST105.012 is the one which has landed on the moon on the wrist of Neil Armstrong and Buzz Aldrin. The Speedmaster had to face 10 competitors (including the Rolex Daytona) and was eventually selected in 1965 by the NASA after a battery of harsh tests in real conditions. After the landing on the moon in 1969, the Speedmaster worn on the moon gets a new nickname: the moonwatch.

• The De Ville: The Omega De Ville was born in the 1960’s. The collection was released as part of the Seamaster family. In 1963, the inscription “Seamaster De Ville” appeared on the dials. In 1967, the De Ville became a separate line. This collection became Omega’s best-selling collection. The De Ville collection is still today made of simple, thin and elegant watches. 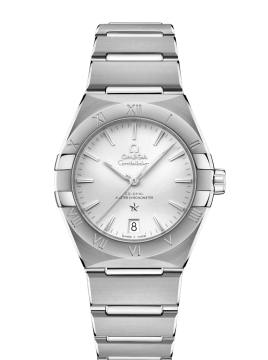